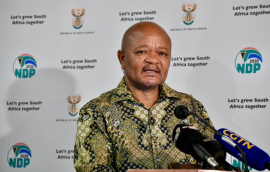 South Africa’s Water and Sanitation Minister Senzo Mchunu announced on Sunday, April 24, 2022, that work to repair the damaged water and sanitation infrastructure in areas affected by floods in KwaZulu-Natal province is underway.

Mchunu, alongside other mayors from affected municipalities, updated the public on the progress of the ongoing repair of water and sanitation infrastructure.

According to Mchunu, a major damage occurred to the pipeline supplying raw water to the eThekwini-based Durban Heights Water Treatment works, causing eThekwini Metro to lose close to 280 mega litres of water. The incident resulted in water shortage in the community.

Mchunu further disclosed that Umgeni Water had improved its water supply rate by an additional 50 mega litres per day to cater to the reduction. The water company has also already procured the pipelines in readiness for repair.

During the media brief, Mchunu assured residents of the affected communities that the water ministry was working in speed in collaboration with the mayors of the affected municipalities to save the situation.

According to the Water and Sanitation Minister, the infrastructure in the affected municipalities was already aging before the damage. Mchunu further disclosed that the ministry would take advantage of the situation to repair and renew the infrastructure.

Mchunu also raised concern over the increased river pollution caused by the sewage spillages due to the damaged sanitation infrastructure in the municipalities.

According to eThekwini Municipality Mayor, Mxolisi Kaunda, the municipality has set aside $37.5 million (R600 million) for the repairs and dispatched councilors to the community level to identify areas that need repairs.